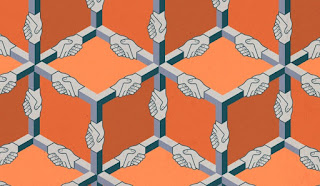 In a previous post I said Bitcoin has problems. http://clearingandsettlement.blogspot.co.uk/2015/11/whats-wrong-with-bitcoin-mtgox.html

Now Mike Hearn has left Bitcoin and that exposes Number 1 of those problems. Bitcoin code relies on the goodwill of developers. The 'Hearn' effect is just another reason why I favour permissioned networks. Those like minded souls, that are permitted, driven by a common commercial cause, have an ownership and governance structure that focuses users on maintaining the best code base.
Bitcoin's problems, to my way of thinking, continue. Latency remains an issue...which is in part driven by block size, which needs to be increased (Bitcoin XT is the reason cited for Hearns departure). Without an increase in block size transaction fees will continue to rise...and this kills another aspect of Bitcoin - it's relevance as a medium for micro-payments.
The biggest conceptual problem for me with Bitcoin are its Green credentials. It's carbon footprint is just hideous. Right now a lot of that carbon is in China. Access to cheap electricity...plus a falling Bitcoin price...I think will result in fewer miners...which then raises the issue of concentration risk (in what should be a distributed network).
Bitcoin sure has some growing pains ahead! What do I feel? Block sizes must increase (to defray transaction costs) and mining needs to become 'cheaper', greener and more transparent (environmental arbitrage which is all taking place behind China's great firewall).

Credit to Dan Page for the piccie. I have a lot of respect for graphic artists who convert concepts in images. I liked this one.

What an interesting couple of weeks for Digital Asset. From being reported at the end of last year as struggling and now they raise 50myn. I'm sure this is just around a tweaking of some of the commercials and having ASX come on board as a 'use case'.
I'll be attending the inaugural ISITC Blockchain working group meeting on the 4th of Feb. I look forward to catching up with people at this event. If you'd like to attend, I'll see what I can do, however I'll need 48hrs notice (security reasons).
Whatever your leisure - may it be a pleasure!

Distributed Ledger Technology: beyond block chain A report by the UK Government Chief Scientific Adviser
Press Release:
https://www.gov.uk/government/news/distributed-ledger-technology-beyond-block-chain
Paper:
https://www.gov.uk/government/uploads/system/uploads/attachment_data/file/492972/gs-16-1-distributed-ledger-technology.pdf
*** Just been reading this and it looks like they lifted my analogy with the Irish electricity market.
ISITC Inaugural Blockchain Work Stream Meeting
http://www.isitc-europe.com/entries/next-event/inaugural-blockchain-work-stream-meeting
JPMorgan: 'aggressively' investing in blockchain tech and robotics.
A note sent to employees by Daniel Pinto, head of JPMorgan's Corporate and Investment Bank, shows that the lender wants to ensure its $9 billion (£6 billion) investment in technology continues in 2016. Blockchain, big data, and robotics are the focus for JPM. Working groups are also being pushed to develop "market-leading platforms," with no detail on what they might be.
http://www.businessinsider.com/exclusive-jpmorgan-employee-note-confirms-aggressiveinvestment-in-block-chain-technology-and-robotics-2015-12
UBS Blockchain Partner Clearmatics Taps Investors for Funds

Imogen Heap shows how smart music contracts work using Ethereum.
"We are going to aim to try and do things in an automated fashion. And so we have these things called smart contracts. These are essentially code; rules written into code which determine what happens when money comes in or when certain actions take place.
"And so we have things here called policies. These are things that the artist might decide on; the terms under which they are willing to allow their music to be used.
"So in the case of just the stems, for example, you could say, I'm happy for them to be downloaded for non-commercial use for $45. If you want to use it in a commercial record then I'll give you 50% of the rights and the recording but I still own the song.
"This is pre-known to everybody, recorded on the blockchain meaning it's transparent and visible to everybody. And when you enact these policies by buying music, this happens automatically – everybody knows who is getting paid and how much.

How to measure the health of Bitcoin? (as per Tim Swanson)
1. Number of Transactions per Day:

2. Number of Bitcoin Days Destroyed (this measures the 'age' of Bitcoins moving across the network. A low BDD represents recently used coins changing hands...a high BDD represents 'old' coins 're-entering' (or being released) back into circulation...a bit like G'ma pulling an old 50 quid note out from under the mattress that she'd been saving for a rainy day....or like someone panicking and selling out of all their Bitcoin positions)

The Challenge of Change