Blockchain Hype Curve, Gold, IoM...I want a Raspberry Pi not a mince one. 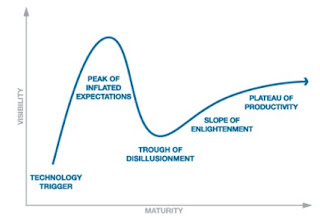 Where has November gone? Home straight to Xmas now and my favorite turning point, the Winter Solstice (Dec 22). I don't mind the cold...but I love watching the days grow longer.
(and hey, early evenings lend themselves to Xmas lights).
As ever the hype around FinTech rages. (see Accenture report of 14byn investment). In my slides I also include one from CB insights which shows who's jumping in when.
After looking at Bitcoin I wanted to check out other cryptocurrencies. There are 630+ of them with market caps all the way down to zero (well they use a ? on their website). I wonder, would anybody be interested in C&S coins? Worth a browse if you thought there was only one cryptocurrency: http://coinmarketcap.com/.
As promised I've also posted my slides from C&S conference:
https://drive.google.com/file/d/0B5sUpOdteCgoc2tCaHhJOXN3ZjQ/view?usp=sharing
This prompted me to update a few of the other tabs. If you notice any links not working or have other comments you'd like to make, more than happy to take them on board.
Also happy to pick up any threads if you think I've missed anything or if you'd like a more relevant explanation. Skipped MiFID this week so plan to catch up on that next week.
Have a great week-end one and all. Whatever your pleasure, enjoy your leisure!
Scott.
www.clearingandsettlement.blogspot.com

Interpreting Technology Hype
When new technologies make bold promises, how do you discern the hype from what's commercially viable? And when will such claims pay off, if at all? Gartner Hype Cycles provide a graphic representation of the maturity and adoption of technologies and applications, and how they are potentially relevant to solving real business problems and exploiting new opportunitieshttp://www.gartner.com/technology/research/methodologies/hype-cycle.jsp
Global investment in fintech ventures tripled to $12.21 billion in 2014
http://www.fintechinnovationlablondon.net/media/730274/Accenture-The-Future-of-Fintech-and-Banking-digitallydisrupted-or-reima-.pdf
KYNETIX LAUNCHES BLOCKCHAIN CONSORTIUM FOR COMMODITIES MARKETS
UK-based Kynetix, a firm that deals in commodity post-trade technology platforms has launched a consortium focusing on integrating blockchain technology into commodities post-trades and mainstream financial services.
https://www.cryptocoinsnews.com/kynetix-launches-blockchain-consortium-for-commodities-markets/
In a permissioned blockchain transactions are validated and processed by those who are already recognised by the ledger i.e. they have been authorised in advance and their identity is known. Their vote counts proportionally against everyone else’s, based on the specific rules of the ledger.
There is much debate about whether permissioned blockchains are true blockchains. The purists believe that you cannot have a true blockchain without the bitcoin permissionless model which incentivises miners to do the verification work.
http://www.kynetix.com/2015/09/04/7-ways-blockchain-technology-could-disrupt-the-post-trade-ecosystem/
*** For Financial Services I believe it will be the 'permissioned' blockchain model that will prevail. At times I interchange this with 'consortium' blockchain (as a medium between the private and public extremes).
Global Arena Holding Comments On Nasdaq's Linq
Global Arena Holding, Inc. (the "Company") (OTC PINK: GAHC), a blockchain technology acquisition and development company, provides investors with commentary on Nasdaq's latest announcement regarding their new blockchain exchange, Nasdaq Linq.
The Company trades on the OTC Pink Sheets under the ticker symbol GAHC. The Company has been publicly traded since 2011 and holds a number of interests, including Global Elections Services, Inc., GAHI Acquisition Corp., and the Blockchain Technologies Corporation, Inc. The Company focuses on acquiring technologies, patents and companies having the ability to leverage the blockchain crypto technology.
http://www.marketwired.com/press-release/global-arena-holding-comments-on-nasdaqs-linq-otc-pink-gahc-2069756.htm
Note: GAHC has now acquired 100% of BTC, as in Blockchain Technologies Corporation (as opposed to Bitcoin!)
ASX considers blockchain for clearing and settlement
http://www.smh.com.au/business/banking-and-finance/asx-considers-blockchain-for-clearing-and-settlement-20151024-gkhs46.html
ASX AND THE PERTH MINT TO DEVELOP PRECIOUS METALS DERIVATIVES PRODUCTS
ASX proposes to distribute the new derivatives products to customers around the world using its 24-hour, globally connected network. The Perth Mint will provide physical precious metals and its world-class secure storage facilities in support of this. The first product is expected to be launched in the second half of 2016.
http://www.perthmint.com.au/media-release-ASX-TPM-develop-metals-derivatives.aspx
Microsoft launches cloud-based blockchain platform with Brooklyn start-up
Blockchain technology is not limited to bitcoin -- it can be used to secure and validate the exchange of any data.
One such company is Ethereum, which has built a fully programmeable blockchain. Technology giant Microsoft is using it for the blockchain platform.
The platform will be available to banks and insurance companies that are already using Microsoft's cloud-based Azure platform.
http://www.reuters.com/article/2015/11/10/microsoft-tech-blockchain-idUSL8N1354JE20151110#BJYwxutsRir6Hst3.97
THE UK’S 25 HOTTEST NEW FINTECH STARTUPS
http://blog.ventureradar.com/2015/11/10/the-uks-25-hottest-new-fintech-startups/

How many crypto currencies are there? At least 623 at the last count.
Good summary of currencies and their market caps here:
http://coinmarketcap.com/
Some Crypo Links to the current Top 5 (by market cap)
https://bitcoin.org/en/
https://www.bitcoin.com/
https://ripple.com/
https://www.ripplecharts.com/#/
https://litecoin.com/
https://www.ethereum.org/
http://dogecoin.com/
So, you'd like to try your hand at mining.
Which are the most profitable coins to mine?
Good summary here:
http://www.coinwarz.com/cryptocurrency
The Earliest Bitcoins....Rai stones of the Yap.
https://en.wikipedia.org/wiki/Rai_stones
Free Bitcoins?
https://www.cryptocoinsnews.com/5-ways-get-free-bitcoins/

ISLE OF MAN TO CREATE CRYPTOCURRENCY BUSINESSES REGISTER
The Isle of Man Government's Department of Economic Development is looking to create a stand-alone register of Island-based digital currency businesses. In order to do so, they are using the protocol of a local block chain service provider, Pythia Limited.

https://www.cryptocoinsnews.com/isle-man-create-cryptocurrency-businesses-register/
*** Note. Pythia is the parent company of Credits.
http://www.credits.vision/
No place on the planet has welcomed digital currencies as warmly as the Isle of Man.
Rational Group, which owns the websites PokerStars and Full Tilt Poker.
Pythia, a Manx startup he founded that provides off-the-shelf software customers can use to create and run their own customized blockchains.
CoinCorner, a bitcoin exchange, on the island in 2014
TGBEX, sells physical bitcoins or—rather, as his lawyer always reminds him to clarify, lest he be classified as a foreign exchange operator—“decorative, metal novelty tokens.”
EVA Plexus, which created a protocol for storing data on the bitcoin blockchain.
Electricity is plentiful and reliable—as are the island’s ultrasecure, resilient data centers. And then there’s the island’s tax structure: no corporate tax; no capital gains or dividend taxes; and low rates of personal taxation, topping off at 20 percent
http://www.bloomberg.com/news/features/2015-09-07/isle-of-man-tax-haven-with-tailless-cats-becomes-bitcoin-hub
https://www.coincorner.com/
BITCOIN BANK NEXTBANK HALTS PUBLIC CROWDFUNDING PROCESS
The world’s first Bitcoin bank NextBank has confirmed that they have received $1.4 million in funding for 4% of the company from 2 venture capitalists from Europe this week. NextBank has previously received $0.95 million in private VC investment bringing the total investment capital to 2.35 million USD.
NextBank’s main goal is still to provide advanced banking services for Bitcoin and cryptocurrency clients around the world. NextBank accounts will be able to support 75+ currencies and precious metals. The modern Bitcoin bank will also offer global Debit Cards, accounts denominated in both fiat such as USD and various cryptocurrencies, SWIFT transfers, an escrow service, currency exchange, and much more.
https://nb.vu
https://www.cryptocoinsnews.com/bitcoin-bank-nextbank-halts-public-crowdfunding-process-receives-2-35-million-usd-total-in-seed-investment-capital/

On November 01, 2015 eCoin.eu together with Online Bank Transfer launched an instant funds deposit service for customers registered in Germany, Austria, France, Italy and Spain. Every customer from the above-mentioned countries possessing an e-Coin account can instantly transfer money from their local bank account and buy any cryptocurrency including Bitcoin.
eCoin.eu is a transparent trading service provider managed by Wallet Capital Group Inc. The company is registered in Panama under Offshore financial Operational Notice. eCoin.eu was founded in 2014.
https://www.cryptocoinsnews.com/bitcoin-trading-platform-ecoin-eu-launches-instant-bank-transfer-for-european-customers/
http://www.ecoin.eu/
Westpac VC invests in Bitcoin player Coinbase
In a deal that will put Westpac Banking Corp in the box seat as cryptocurrencies develop, the bank's venture capital fund, Reinventure Group, has invested in Coinbase, one of the world's pre-eminent Bitcoin companies.
In the first deal involving an Australian bank and a Bitcoin company, it is understood that Reinventure joined a $US75 million raising Coinbase conducted earlier this year, which also won support by some of the world's largest venture capital firms, the New York Stock Exchange and former Citigroup CEO Vikram Pandit.
http://www.smh.com.au/business/banking-and-finance/westpac-invests-in-bitcoin-player-coinbase-20150629-gi133w#ixzz3seRnkcxV

Are bitcoin and the banks worth it or a waste of time?
The bank's (CBA) Ripple experiment is a long-term play. At this stage CBA, like everyone else, does not know whether Ripple, or bitcoin for that matter, will become dominant protocols that change the orthodoxy on how payments are sent and received. It might be that cryptocurrency volume continues to wane and the hype goes nowhere. But CBA does not want to be left on the sidelines if demand for cryptocurrencies takes off. It joins a handful of other early adopters elsewhere in the world – Germany's Fidor became the first bank to integrate Ripple's protocol into its payments infrastructure, with two US banks, CBW Bank and Cross River Bank, following suit four months later.
http://www.afr.com/technology/are-bitcoin-and-the-banks-worth-it-or-a-waste-of-time-20150604-ghh9n8#ixzz3sedSeFOF
Fidor Becomes First Bank to Use Ripple Payment Protocol
San Francisco-based decentralized payment network provider Ripple Labs has announced that German Internet direct bank Fidor is now using the Ripple protocol as part of its transaction infrastructure.
http://www.coindesk.com/fidor-becomes-first-bank-to-use-ripple-payment-protocol/

Submission to the Inquiry into Digital Currency
The Reserve Bank of Australia has prepared this Submission for the Senate Economics References Committee’s inquiry into Digital Currency. The Bank recognises that the concept of a decentralised ledger is an innovation with potentially broad applications for a modern economy, and that digital currencies represent an interesting development in the payments and financial system landscape. Accordingly, the Bank takes an interest in digital currencies and monitors developments in this area.

Financial benchmarks: Commission welcomes agreement on new rules to prevent manipulation
The agreement will improve the governance of such benchmarks produced and used in the EU in financial instruments such as bonds, shares, futures and swaps.
The Regulation will contribute to the accuracy and integrity of benchmarks used in financial instruments and financial contracts by:
– ensuring that benchmark administrators are subject to prior authorisation and supervision depending on the type of benchmark (e.g. commodity or interest-rate benchmarks);
– improving their governance (e.g. management of conflicts of interest) and requiring greater transparency on how a benchmark is produced;
– ensuring the appropriate supervision of critical benchmarks, such as EURIBOR/LIBOR, the failure of which might create risks for market participants and for the functioning and integrity of markets.
http://europa.eu/rapid/press-release_STATEMENT-15-6169_en.htm?locale=en

Raspberry Pi Rolls Out $5 Computer
Ten thousand units of the device, about the size of a money clip, were being given away free in the U.K., packaged up with the December issue of The MagPie, Raspberry Pi’s magazine, which hit newsstands Thursday.
http://blogs.wsj.com/digits/2015/11/26/raspberry-pi-rolls-out-5-computer/?mod=trending_now_1

Alibaba Brought in $1 Billion During the First 8 Minutes of China's Black Friday
On Singles Day, the company alone made more money than every American online retailer makes on the weekend after Thanksgiving.
http://www.theatlantic.com/business/archive/2015/11/singles-day-alibaba-black-friday/415431/

YouTube Music Opens After a Year in Beta
YouTube Music, a longtime work in progress, is now available to iPhone and Android phone owners.
The app is Google parent Alphabet Inc.’s second built to rival Spotify, Apple Music, Tidal, Pandora and other streaming music apps out there. But YouTube Music differentiates itself by focusing on music videos and the enthusiastic, though not always pitch-perfect, amateur recordings that YouTube is known for.
http://blogs.wsj.com/digits/2015/11/12/youtube-music-opens-after-a-year-in-beta/?mod=WSJ_TechWSJD_NeedToKnow
Unicorn is a term in the investment industry, and in particular the venture capital industry, which denotes a start-up company whose valuation has exceeded (the somewhat arbitrary) $1 billion dollars.
Full graphic of Unicorns here:
https://cbi-blog.s3.amazonaws.com/blog/wp-content/uploads/2015/10/overcrowded-unicorns-v2.png
How the hidden menace of coral bleaching is going global.
http://www.abc.net.au/news/2015-11-27/global-reef-bleaching-leaving-behind-coral-graveyards/6972150
Source:
http://clearingandsettlement.blogspot.com/2015/11/blockchain-hype-curve-gold-iom…
Share
Category
RSS feed