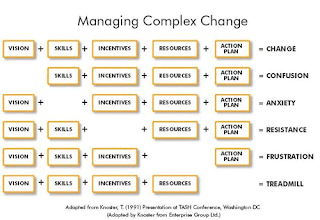 The piccie is one sent to me by my brother. It resonates with me for 2 reasons. One is the practicalities of the diagram (some versions label 'treadmill' as 'false starts', but having lived the dream(s) I think treadmill far more appropriate). The other is that it shows for transformational projects to succeed there are combinations of dependencies. I don't think management nees to be added to the mix (already covered in skills and resources) but I do think there is space for an emotional intelligence dependency. You can have skills, resources and incentives but if the people mix is wrong....it won't fly. Maybe a purist catches this under resources...but to me resources is just bandwidth. It is the synthesis that is critical.


I also attended the Citi Digital Money Symposium. I was very impressed by the pedigree of the speakers. I was also very impressed with the practical and theoretical work of Imperial College's Cryptocurrency Research and Engineering department. http://www.imperial.ac.uk/cryptocurrency
Even the BBC is covering Blockchain these days....
https://www.cryptocoinsnews.com/bbcs-click-blockchain-documentary/
(Includes more coverage from IC's Prof. William Knottenbelt)

Yet another white paper out last week: this one from DTCC.

Happy, belated, Australia Day and farewell to Chi-X. The last of the constituent parts have found a new home. CXE to BATS, CXC to Nasdaq, CXA and CXJ etal to Flowers.

Have a great week all!

New DTCC White Paper Calls for Leveraging Distributed Ledger Technology to Solve Certain Long-Standing Operational Challenges
The paper, titled “Embracing Disruption – Tapping the Potential of Distributed Ledgers to Improve the Post-Trade Landscape,” notes that while today’s financial market infrastructures have a proven track record of providing stability, reliability and certainty, they are often quite complex, siloed and not equipped for 24/7/365 processing. DTCC believes a secure distributed ledger, with complete and traceable transaction history for a set of assets that is shared and accessible only between trusted parties, could provide significant operational improvements as well as further mitigate risk and reduce post-trade costs.
http://dtcc.com/news/2016/january/25/new-dtcc-white-paper-calls-for-leveraging-distributed-ledger-technology
Accenture Report:
Top 10 Challenges for Investment Banks 2016
The impact of digital technology on investment banking
https://www.accenture.com/us-en/insight-top-ten-challenges-investment-banks-2016.aspx
** Challenge 4 is. of course, Blockchain technology.

Microsoft to Offer Ethereum-Based Services on Azure
The software giant has formed a partnership with Brooklyn-based Consensys, a startup that is building products and services for Ethereum, an alternative platform to bitcoin. Through the partnership, customers of Azure, Microsoft’s cloud-based business service, will have access to tools that will allow them to experiment with and build products that can digitize and automate a plethora of operations, from securities trading to cross-border payments to corporate accounting, and offer them to their own customers.
Vitalik Buterin, a 21-year old programmer and writer, launched Ethereum this summer as a platform for what are called smart contracts. While bitcoin was designed with the single purpose of exchanging digital currency, Ethereum has broader goals. Ethereum’s mandate is to provide businesses with a platform on which products and services can be built that simplify various business functions and cut out the need for third parties. Anything that can be digitized, cryptocurrencies, derivatives trading, securities trading and settlement, even property titles, is a potential service on Ethereum.
http://blogs.wsj.com/moneybeat/2015/10/28/bitbeat-microsoft-to-offer-ethereum-based-services-on-azure/

Correspondent central banking model (CCBM)
Procedures for Eurosystem counterparties
Update effective as of 25 January 2016 https://www.ecb.europa.eu/paym/coll/ccbm/html/index.en.html
** This is a nice updated explanation of the CCBM model.

The European Commission proposed taxing financial services in 2011, in the wake of the financial crisis. Lacking unanimous approval, an “enhanced cooperation” group of 11 countries agreed to push the project: France, Germany, Italy, Portugal, Spain, Greece, Belgium, Slovenia, Slovakia, Estonia and Austria. Estonia has since withdrawn, arguing that the costs associated with the tax would be higher than the revenues.
Some other countries in the group, such as Slovenia, now appeared reluctant too and the withdrawal of two or more countries would sink the proposal, since EU rules require at least nine countries to back such a procedure.
http://www.politico.eu/article/belgium-tobin-tax-van-overtveldt-disagreement-financial-transactions-speculation-tobin-van-overtveldt-charles-michel/
Too big to behave?

European Bank Resolution: Making it work!
From the start of 2016, new rules for bank resolution are in place – as spelled out in the Bank Recovery and Resolution Directive (BRRD) – across the EU, and a new authority (the Single Resolution Board, or SRB) is fully operational for resolving all banks in the eurozone.
The implementation issues of the new regime are enormous. Banks need to develop recovery plans, and authorities need to create resolution plans as well as set the minimum required amount of own funds and eligible liabilities (MREL) for each bank. But given the diversity in bank structures and instruments at EU and global level, this will be a formidable challenge, above all with respect to internationally active banks.