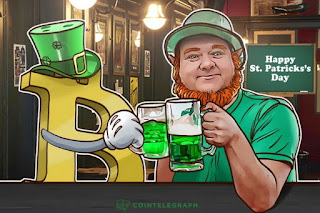 Been a while between blog posts. Basically I've been doing some housekeeping on some of the pages supporting the blog.

Dash's dash up the market cap rankings is impressive. https://coinmarketcap.com/. Contrast this to BTC's performance and the Winklevoss ETF. What differentiates to me is the Governance. Before we even get to the Tech, we need Governance (dispute resolution), Legal Framework (certainty and finality) and Regulatory Clarity.

Exciting news (?). Alan Cameron is up for Global Custodian Person of the Year!
You can vote for him at this web site using the poll code 'gcpoty'.
https://iqpolls.com/vote/ `
He's got my vote.

I look forward to catching up any interested parties there.

This posting rather abridged.
I want to get these stories out of the way (I add the stories incrementally, then start with a clean sheet after a posting).

Have a great St Patricks Day.

Ethereum Sets Record Highs, $40 Price and $3.6b Market Cap
...cheer at community forums for the upcoming “Flippening” – the moment that Ethereum overtakes the place of Bitcoin in the world. They point to the technological and governance problems holding back Bitcoin from being used as an efficient payment system and to the many new solutions that are based on Ethereum coming out every day.
http://www.financemagnates.com/cryptocurrency/trading/ethereum-sets-record-highs-40-price-3-6b-market-cap/

The Promise of FinTech – Something New Under the Sun? - speech by Mark Carney
http://www.bankofengland.co.uk/publications/Documents/speeches/2017/speech956.pdf

DTCC Using Distributed Ledger Technology to Improve the Post-Trade Process.
DTCC announced that it has selected IBM, in partnership with Axoni and R3, to provide a distributed ledger technology (“DLT”) framework to drive further improvements in derivatives post-trade lifecycle events. The firms will work collaboratively to re-platform DTCC’s Trade Information Warehouse (“TIW”).
The solution has been developed with input and guidance from a number of market participants including Barclays, Citi, Credit Suisse, Deutsche Bank, J.P. Morgan, UBS and Wells Fargo, and key market infrastructure providers, IHS Markit and Intercontinental Exchange.
The end-state vision to establish a permissioned distributed ledger network, governed by DTCC, with peer nodes at participating firms.
IBM will lead the initiative, provide program management, DLT expertise, and integration services, and offer the solution-as-a-service. Axoni will provide distributed ledger infrastructure and smart contract applications, with R3 acting as a solution advisor.
Development is expected to begin in January 2017 and build on Axoni’s AxCore distributed ledger protocol which will be submitted to Hyperledger when the solution goes live, anticipated in early 2018.
http://www.dtcc.com/news/2017/january/09/dtcc-selects-ibm-axoni-and-r3-to-develop-dtccs-distributed-ledger-solution

The Global Blockchain Business Council (GBBC) was due to launch this week at Davos.
http://www.gbbcouncil.org/

“Bitcoin Jesus” Roger Ver Suspended from Reddit.
Investing in startups including bitcoin.com, Blockchain, Z.cash, BitPay, Kraken, Purse.io and Ripple, Ver contributed over a $1 million toward creating the bitcoin ecosystem over the past six years.
He has now been blocked from Reddit for referring to the real name of Bitcoin forum administrator “Theymos”. Ver was thus accused of an offense known as doxxing (exposing a private individual’s details) despite the fact that a simple Google search will return a number of sources with the real identity of the person behind the Theymos moniker.
Theymos has repeatedly been accused of employing very harsh censorship policies, crushing debates about how to reform the blockchain both on Reddit and on Bitcointalk.
http://www.financemagnates.com/cryptocurrency/news/bitcoin-jesus-roger-ver-suspended-from-community-forum-on-reddit

Canadian Securities Regulators Adopt Rules for Over-the-Counter Derivatives Clearing
National Instrument 94-101 Mandatory Central Counterparty Clearing of Derivatives requires certain counterparties to clear certain standardised OTC derivatives through a central counterparty clearing agency, subject to exemptions set out in the instrument.
National Instrument 94-102 Derivatives: Customer Clearing and Protection of Customer Collateral and Positions is designed to protect a local customer’s positions and collateral when clearing OTC derivatives and to improve clearing agencies’ resilience to default by a clearing intermediary. The instrument includes requirements related to the segregation and portability of customer collateral and positions as well as detailed record-keeping, reporting and disclosure requirements.
NI 94-101 comes into force on 4 April, 2017 and NI 94-102 on 3 July, 2017.
https://www.securities-administrators.ca/aboutcsa.aspx?id=1551

Japanese Giant GMO Enters Cryptocurrency Exchange and Trading Business
...the Ministry of Finance and the Financial Services Agency are considering the elimination of the consumption tax on cryptocurrency transactions by the spring of 2017, and if this is happens, the further spread of cryptocurrency in Japan is expected.
http://www.financemagnates.com/cryptocurrency/exchange/japanese-giant-gmo-enters-cryptocurrency-exchange-and-trading-business

Russia’s central bank is continuing to grow its blockchain footprint, having announced the creation of a new FinTech association focused in part on studying the technology.

AMF to Launch its ‘I See Why’ Surveillance System in Mid-2017
France’s financial markets regulator, the Autorité des Marchés Financiers (AMF), today said it will implement a new market surveillance system for the country’s financial market, dubbed the ‘ICY system’. The system was developed internally with the backing of IT company Neurones
http://www.financemagnates.com/forex/regulation/francs-amf-launches-its-i-see-why-surveillance-system-in-mid-2017

Virtu Offers $1.3 Billion for KCG to Create Trading Leader
Virtu Financial Inc. offered to buy KCG Holdings Inc. for as much as $1.3 billion, amid signs the high-speed trading industry is finding it harder to make money.
New York-based Virtu, which combined with Madison Tyler Holdings LLC in 2011, closed down 0.6 percent.
KCG was formed when high-frequency trader Getco LLC combined with the ailing Knight after a mishap with one of Knight’s trading algorithms cost the firm $440 million in 30 minutes.
https://www.bloomberg.com/news/articles/2017-03-15/virtu-makes-unsolicited-1-3-billion-offer-for-rival-trader-kcg

Interactive Brokers Group Announces Decision to Cease Options Market Making Activities
Interactive Brokers Group, Inc. (NASDAQ GS:IBKR) announced that it will discontinue options market making activities globally, which are conducted through its Timber Hill companies.
Thomas Peterffy, Chairman and CEO, said, “Having initiated the first automated option market making operation in the mid ’80s, which grew into the largest such business on a global scale over the next 25 years, it’s been painful for me to see it deteriorating in the last few years. But we do not have a choice in this matter. Today retail order-flow is purchased by large order internalizers and joining them would represent a conflict we do not wish to have. On the other hand, providing liquidity to sophisticated, professional synthesizers of short-term fundamental, technical and big data is not a profitable activity.
http://www.businesswire.com/news/home/20170308006416/en/Interactive-Brokers-Group-Announces-Decision-Cease-Options

Planning for Brexit - Operational impacts on wholesale banking and capital markets in Europe
AFME has commissioned a report from PwC, outlining the operational impacts and transformation challenges that Brexit poses to the provision of banking services in the EU [53pages]
http://www.afme.eu/en/reports/publications-and-data/publications/planning-for-brexit/

Euro Clearing and Brexit - The Practitioners' View.
The paper suggests why it could be in the best interests of the EU for clearing of these products to continue outside the Eurozone and highlights 4 key findings...
http://www.fsnf.uk/2017/01/euro-clearing-and-brexit-practitioners.html

Brexit:
Passporting appears to be out, which leaves the UK with a "Third Country Regime" status. Good explanation of the implications here.
https://www.thecityuk.com/assets/2017/Reports-PDF/the-eus-third-country-regimes-and-alternatives-to-passporting-executive-summary.pdf

Speech by the President of the Eurogroup, Jeroen Dijsselbloem, at The Future of Europe event, 24 January 2017
https://www.neweurope.eu/press-release/speech-by-the-president-of-the-eurogroup-jeroen-dijsselbloem-at-the-future-of-europe-event-24-january-2017/

Updated video clip from the Solent swim for MND.
http://www.swimmingthesolent4mnd.com/2016-swim-gallery/

Simon Sinek: How great leaders inspire action.
This was filmed in 2009...30 million views since.
He talks about the need for businesses (or individuals) to address the:
1. Why we do what we do.
2. How we do what we do (differentiate).
3. What we offer (product).
The nice hook here is he correlates these processes to the biology of the brain:
The outer brain / neo-cortex, responsible for language and rationalisation, he equates to the 'what'.
The inner brain / limbic brains, responsible for feelings like trust, loyalty and 'gut feelings', i.e. decision making, he equates to the why (passion and commitment) and how.
He also talks about the Law of Diffusion of Innovation (originally from 1962!) and metions both the tipping point for market penetration at between 15% and 18% and 'crossing the chasm' (Geoffrey More).
https://en.wikipedia.org/wiki/Diffusion_of_innovations
https://en.wikipedia.org/wiki/Crossing_the_Chasm

Dunbar's number
By using the average human brain size and extrapolating from the results of primates, he proposed that humans can comfortably maintain only 150 stable relationships.
https://en.wikipedia.org/wiki/Dunbar's_number

The modern military company became popularized during the reorganization of the Swedish Army in 1631 under King Gustav II Adolph. For administrative purposes, the infantry was divided into companies consisting of 150 men, grouped into regiments of eight companies.
https://en.wikipedia.org/wiki/Company_(military_unit)

The Space Shuttle and the Horse's Rear End
The United States standard railroad gauge of 4 feet, 8 1/2 inches derives from the original specification for an Imperial Roman army war chariot.
http://www.astrodigital.org/space/stshorse.html

Community Size, and Architecture in the Late Pre-Pottery Neolithic
http://tuvalu.santafe.edu/~bowles/PeopleSpace.pdf