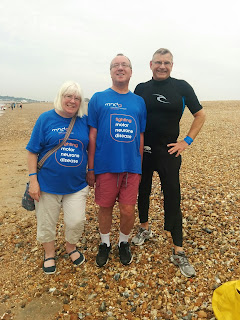 As ever lots going on.

I was delighted to complete the Solent Swim for MND. The piccie is me with warrior Dave Setters who is advancing the MND awareness campaign in the City. For those of you that could still donate to this cause, that would be great. You can read more about the story here: https://www.justgiving.com/fundraising/ScottRiley-MNDSwim

Blockchain Will Become ‘Beating Heart’ of the Global Financial System
Blockchain, the technology behind bitcoin could profoundly alter the way banks do business worldwide, lowering their operating costs and making financial services securer and more accessible, a World Economic Forum Report finds.
https://www.weforum.org/press/2016/08/blockchain-will-become-beating-heart-of-the-global-financial-system/
*** Another nice 130 page document. I confess, I've not read it all, I just cherry picked the potential use cases (deep dives) that were of interest to me. I think the editorial team have done a great job. the report is consistent through-out and the icons and logos are great too!

*** Some takeaways...clarity on equity market structure, subset of use cases, engaged on concept, could replace Chess, industry engagement, Chess...BAU.

ItBit Rebrands as Paxos Amid Blockchain Pivot
http://www.coindesk.com/itbit-rebrands-paxos-amid-blockchain-pivot/
*** All part of recent restructuring / realignment between DLT and BTC

Global Banks Announce Partnerships and Investments at Ripple
Ripple CEO Chris Larsen stated that Standard Chartered’s backing came as part of a strategic investment round of $55 million, from a wide swath of the financial industry. Alongside this new round, the company announced eight new bank customers, including Standard Chartered, BMO Financial Group and Shanghai Huarui Bank.
Ripple has received a total of over $93 million in funding.
http://observer.com/2016/09/global-banks-announce-partnerships-and-investments-at-ripple/

Devcon2
#Devcon2 in Shanghai is around the corner after it's highly successful Devcon London last December. This years event stands to be even bigger. Held in conjunction with the Global Blockchain Summit where Microsoft is a key sponsor. Vitalik is expected to comment on Ethereum2 and it's new roadmap to address concerns about consensus networks.
http://www.coindesk.com/vitalik-buterin-new-mauve-paper-devcon2/
Registration for Shanghai is full. (Amazing in itself).
https://ethereumfoundation.org/devcon/
All part of International Blockchain Week in Shanghai
http://www.blockchainweek2016.org/index_en.html#summit

Blockchain Requires Radical Change, Not Compromise
Frances Coppola (@Frances_Coppola)
http://www.coindesk.com/dont-compromise-technology-redesign-business/
*** I liked this author's style. I also like her twitter account which I'm now following. It prompted me to comment (which I rarely do - I used an old passport photo as an avatar to hopefully capture that 'hipster' look)....
Very nicely presented piece...but just doesn't resonate 100% with me.
"To use radical new technology effectively, you have to be radical"....hmmm, some best radicals find new simplicity and patterns. (e.g. it was radical to think of the earth not at the center of the universe....but look how much simpler orbits were to explain as a result of that radical thinking).
"So they compromised. They went for a permissioned DLT." Nothing wrong with permissioned. Markets are already permissioned via membership requirements. And dark pools are not all bad either (appreciate the "Flash Boys" arguement).
You cannot radically change settlement and clearing processes while leaving trading practices untouched.
I think you can, and we do decouple the transaction value chain (Think trading / exchanges, Clearing / CCPs and Settlement / CSDs). These components of the transaction value chain are often represented by different legal entities which interface. The debate is vertical / horizontal.
Part of the difficulty in going through all this subject matter is the ambiguity of some of the processes (i.e. domestic market practices). This piece covers so much ground, admirably, but each issue needs a further level of granularity to really tease out the issues.
Regardless, I enjoyed reading the post, it is in a nice style and more insightful than most (if I may say).

Blockchain's Numbers Don't Add Up
So a real-world example, then, that it takes 20 years for a new, efficient 2 billion-euro post-trade system with full central-bank backing to start recouping its cost. It would be a miracle if blockchain could repeat this feat in a fraction of the time without similar backing or funding.
https://www.bloomberg.com/gadfly/articles/2016-09-08/blockchain-s-ambitions-thwarted-by-funding-resources
*** I think this is the wrong analogy. FinTech 'mice' can work in harmony with the 'elephants' of FMI, you just need to know the melody (and that;s not 2 billion)

Just on Standards, they're Standards...and by their very nature open.

Land Registry is one DLT use case I've had the pleasure to look into with BAT.
Interesting stance on UK privatisation.
https://weownit.org.uk/evidence/land-registry
Now put on hold:
https://hansard.parliament.uk/commons/2016-06-30/debates/16063030000001/LandRegistry
Lammy added: “It pays rich dividends to the public purse and there’s absolutely no reason why it should pay dividends only to wealthy investors and shareholders in the future.”
https://www.theguardian.com/money/2016/jul/01/land-registry-sale-privatisation-new-government-george-freeman

Incorporating blockchain technology in land registries is not new. The Republic of Georgia and Honduras have been conducting such experiments in recent years, while Sweden is the first advanced western country to take steps in this direction
(BTW, the jurisdiction BAT looked at is not listed above).
http://www.citymetric.com/politics/forget-privatisation-land-registry-needs-blockchain-2233

Sweden Conducts Trials of a Blockchain Smart Contracts Technology for Land Registry
...Rather it is about reforming the workflow of selling a property that integrates with existing systems for keeping track of who owns what.
https://bitcoinmagazine.com/articles/sweden-conducts-trials-of-a-blockchain-smart-contracts-technology-for-land-registry-1466703935
*** Love it! This comment hits the nail on the head.
bit.ly/2bQQyiE

How Bitcoin Succeeded Where Ethereum Failed
Ethereum recently hard forked their blockchain to reimburse users who were affected by a poorly structured smart contract, known as The DAO. The hard fork was cheered as a great success shortly after it was initiated, and some supporters of a Bitcoin hard fork for the purpose of increasing the block size limit even took the opportunity to claim that hard forks aren’t as scary as some make them out to be.
“Ethereum isn’t fixing something technical – they’re doing a bailout of a company [or] group that screwed up,” Bitcoin Core contributor Peter Todd told CoinJournal. “Nothing in this bailout hard fork actually fixes anything technical.”
http://coinjournal.net/bitcoin-succeeded-ethereum-failed/

A Primer on Bitcoin Governance, or Why Developers Aren’t in Charge of the Protocol
https://bitcoinmagazine.com/articles/a-primer-on-bitcoin-governance-or-why-developers-aren-t-in-charge-of-the-protocol-1473270427
*** Great piece and highlights governance of code and implementation(s).

Why the coffee shop doesn't want your Bitcoin!
....Starbucks doesn’t want your stupid bitcoin. Fraudulent coffee transactions are not a pain point. The card is physically present, so the barista knows you didn’t just go on Alphabay and buy a list of stolen numbers. Plus she’s watching you consume the coffee right there. If you have a problem with said coffee, you ask for a new one. There’s not gonna be a chargeback.
http://elaineou.com/2016/08/01/the-value-of-settlement-finality/
*** An unconventional read - but I enjoyed the reality check.

How Bucket Shops Democratized Access to the Financial Markets
http://elaineou.com/2015/05/05/how-bucket-shops-democratized-access-to-the-financial-markets/

And a further insight into Credit Card charging process (for that coffee).
https://www.merchantmaverick.com/the-complete-guide-to-credit-card-processing-rates-and-fees/

Happy T2S
With wave 3 on board, T2S is now processing about 45% of the total transaction volume expected after the end of full migration in 2017. The next migration wave (wave 4) is planned for 6 February 2017.
https://www.ecb.europa.eu/paym/t2s/html/index.en.html

Goldman Sachs Has Started Giving Away Its Most Valuable Software
The bank’s new gambit: deploy its technology to win more business from clients
http://www.wsj.com/articles/goldman-sachs-has-started-giving-away-its-most-valuable-software-1473242401

Former BoE official expects euro clearing to leave London post-Brexit
Britain's dominance in euro-denominated clearing of financial contracts will end after the country's withdrawal from the European Union, former Bank of England Governor Charlie Bean said on Wednesday.
French President Francois Hollande has said this should move to the euro zone in future after Brexit, but banks have privately expressed scepticism that this can be done.
"I think it's certain that we will lose it," Bean told a House of Lords committee.
He said he had "absolutely no doubt at all" that euro denominated clearing will be mandated to be taken back to the euro zone.
http://uk.reuters.com/article/uk-britain-eu-clearing-idUKKCN11D124

In Global Banking, Apps and Security Don't Mix
Back in February, Bangladesh's central bank revealed that it had fallen victim to an $81 million theft. (Actually, the Philippine Daily Inquirer broke the news – the Bangladesh bank would have preferred to keep the information under wraps pending investigation.)
Since then, dozens of banks around the world revealed a series of thefts involving Swift, the global financial messaging system. Just last week, Swift disclosed new cyberattacks involving its system. In each case, bank computers were compromised to enable unauthorized transfer requests.
https://www.bloomberg.com/view/articles/2016-09-07/in-global-banking-apps-and-security-don-t-mix

Deutsche Bank calls for reform of global financial messaging system SWIFT
SWIFT is only as strong as its weakest member, Deutsche Bank's Chief Information Security Officer Hinrich Voelcker said on Wednesday, adding the bank was in discussions with SWIFT about the consequences of the Bangladesh heist.
http://www.reuters.com/article/us-deutsche-bank-swift-idUSKCN11D1WA

What Else Can Central Banks Do?
The latest Geneva Report on the World Economy argues that central banks can do more to stimulate economies and restore full employment when nominal interest rates are near zero. Quantitative easing and negative interest rates have had beneficial effects so far and can be used more aggressively, and the lower bound constraint can be mitigated by modestly raising inflation targets.
http://voxeu.org/content/what-else-can-central-banks-do
*** Note, requires one time registration, but it's worth it. Not a spam site!

State of the Union 2016: Completing the Capital Markets Union – Commission accelerates reform
On the occasion of President Juncker’s 2016 State of the Union address, the European Commission has today set out the next steps to accelerate the completion of the Capital Markets Union (CMU), a flagship project of the Juncker Commission to boost jobs and growth in Europe.
http://europa.eu/rapid/press-release_IP-16-3001_en.htm

PM should seek parliamentary approval over article 50, says Lords committee
“It would be constitutionally inappropriate, not to mention setting a disturbing precedent, for the executive to act on an advisory referendum without explicit parliamentary approval – particularly one with such significant long-term consequences. The government should not trigger article 50 without consulting parliament.”
http://www.theguardian.com/politics/2016/sep/13/pm-theresa-may-article-50-parliamentary-approval-house-of-lords-committee
*** Hmmm, should a democratic government (where the majority of MPs will vote for gravy train, opps, sorry remain), be able to over-rule an 'advisory' (ballot paper never suggested to me they were asking for my advice!) referendum. I guess only honourable Lords know the difference between responsible 'speculation' and citizens reckless 'gambling'.

The next big thing in CSR.
The Modern Slavery Act: How should businesses respond?
https://www.pwc.co.uk/assets/pdf/msa-updated-briefing-document.pdf

Fiji's appreciation for Ben Ryan's role in guiding their men's sevens side to Olympic gold has seen him awarded a three-acre plot of land which features a mountain and waterfalls.
http://www.espn.co.uk/rugby/story/_/id/17420407/ben-ryan-given-land-mountain-waterfalls-fiji

A strategy to maximise bonuses and avoid personal culpability:
http://www.macroresilience.com/2013/12/04/how-to-commit-fraud-and-get-away-with-it-a-guide-for-ceos/

This was rather too emotionally heavy for me. Great prose.
Brings home both the awfulness and tragedy.
http://www.esquire.com/news-politics/a48031/the-falling-man-tom-junod/