The response to Daesh and UK vote for Syrian airstrikes 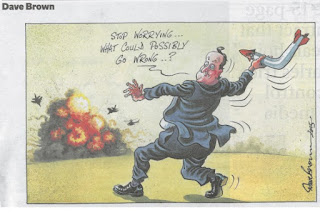 How to respond to Deash? This question has been preying on my mind a lot since the events in Paris. Most recently the UK has voted to bomb Syria. As much as I abhor the cowardly acts of terrorists I don't feel that dropping bombs, in haste, is the right answer.

Some things that annoy me:

1. Democratic Process and debate.
In my humble opinion Westminster and democracy work best when full and frank debate is encouraged and supported by fact. I've never been a labour voter (I lean to the right based on economically sustainable principles) but I must say I whole heartedly admire Jeremy Corbyn, the current opposition leader. As he set out to do, I think he has made every endeavor to bring respectability and quality of debate back into 'the house'. On the war front, all he has asked for is the voice of reason, what difference will it make, if we start bombing people (and assets) now? I think David Cameron's response to this reasonable question with the rhetoric "We cannot let that man inflict his security-threatening, terrorist-sympathising, Britain-hating ideology on the country we love" does himself, his party and the political process a great dis-service. I don't know if i'd call it an attempt at bullying, but shouting is most certainly not informed debate.
2. Deselection hypocrisy.
I was glad the vote was a 'free' one. People could act in line with their conscience (and their electorate) rather than on pure party political lines. Government works because we elect people to represent our views - obviously we can't please all the people all the time, but ideally the majority. Some labour MPs, that voted to drop bombs, then cried that they were being bullied with the threat of de-selection. Well, if you don't want to be de-selected, vote in a manner that your constituents have empowered you for. I fear some of these people forget the station of their office is to serve and represent their constituents. I think it is farcical that they run crying to the police with talk of bullying whilst at the same time throwing incendiary devices at others. Man up and face up! In the event of any war vote I would like to see a Member (or more) of Parliament (selected at random, including the PM, that's why we have deputies) to be sent to the front to provide accurate reports of the effectiveness of any campaign. I think this would greatly help to focus the mind.

3. We should help our NATO friends.
Absolutely! Of course all nations should do their bit. Terrorist atrocities can simply not be ignored. But sometimes a friend gives you wise counsel...not just telling you what you want to hear and recklessly charging around the corner with you. Britain is still great at many things. Apparently 60% of all high resolution reconnaissance comes from UK sorties. The UK is already in the air above Syria and doing good and valuable work. They can continue to do this...just without dropping bombs. Why doesn't the UK aspire to be a center of excellence for reconnaissance? This can still make a hugely valuable contribution to the global response to Daesh. Likewise, there is also much debate about the 70 thousand 'loosely' aligned ground troops. UK academia has plenty of understanding of the fabric that makes up the Middle East. Why not charge them with the responsibility for reporting on the alignments or 'pre-conditions' to talking between all these factions. Surely understanding them is better than bombing them. (Russia won't talk to Turkey, Turkey won't talk to the Kurds, factions won't talk to factions etc, etc.)

4. Terms of Reference.
Once their is a clear definition of what is acceptable intervention, then this intervention should be followed to conclusion. I'd like to see a clear distinction between bombing assets and bombing people. (Another thing about war that troubles me is the division of life and assets. The rank and file that make the 'Forces' what they are risk their lives. In the inevitable reconstruction process it is investors that reap the reconstruction dividend. All too often, these 2 circles do not overlap).

5. The refugee crisis.
No one flees their home without reason. I dare say many Syrians would prefer to be 'at home' (who risks the lives of their children?) The fact that Europe is besieged with immigrants surely spells out that things are not right at home. I imagine bombs and the risk to life is one reason why people are fleeing. I don't understand how dropping more bombs alleviates the refugee crisis. I guess some will say maybe their needs to be some 'short term, regime change' pain, but to date in the Middle East we've seen nothing short term.

6. Parents.
Every soldier, every civilian and even every terrorist has a parent. That is potentially at lot of pain and anguish. Considering the human cost, i just feel there has to be a better way than greeting people with a fist.

Rant over. Back to Clearing and Settlement and the Blockchain.

In defence of Jeremy Corbyn
Naive he may be, but he’s consistent – and at least he’s thinking about the futurehttp://new.spectator.co.uk/2015/11/jeremy-corbyn-is-more-sensible-about-syria-than-david-cameron/

"Daesh hates being referred to by this term and what they don't like has an instinctive appeal to me."
http://i100.independent.co.uk/article/why-isis-will-hate-it-if-we-start-calling-them-daesh--bkC822p_zl