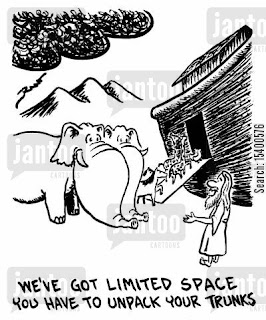 As ever, more than a few events...and yet more DLT papers. One of the terms that has popped up in the last couple of weeks, that I very much like, is 'un-packing'. i.e. the process of breaking things down into their constituent parts. Nothing new there. We have forever been commoditising processes and focusing on those elements which add commercial advantage.

In DLT speak so much more needs to be done on understanding 'blockchain' and that extends onto standards and into data. I don't think enough is being made of data in the DLT discussions. What is in the data that we carry on a blockchain and how do we look into a block and manage or unpack that data? This is where I want the 'smart' in smart contracts to be.

I also attended an MND event. This also got me thinking about 'un-packing'. Pharmaceutical companies are much better at embracing, adopting and embedding new technologies that Fin Svs firms. Once a new drug may have been discarded based on 'poor' test results. Now with DNA markers, data can be unpacked, and a drug that previously looked unsuccessful may indeed be highly successful (life changing) in a some specific use cases. I expect designer drugs for individual clinical problems to be a reality in my life time (albeit unaffordable - I suspect the next generation will get the commoditised product).
Unpacked data can provide new insights...if it is able to me measured and mined.
BTW, this re-inspired me to understaken to swim the Solent again this year to support MND.
http://www.swimmingthesolent4mnd.com/
I'll reach out closer to event date to those who may feel this a worthy cause.
(Likewise, if you know people afflicted with MND and you'd like to raise awareness through the City against MND please let me know and I'll refer you to the right people.)

One of the papers I did manage to get through was the Swift paper.
https://www.swift.com/insights/press-releases/swift-and-accenture-outline-path-to-distributed-ledger-technology-adoption-within-financial-services
(you can also pick up the Spanish version here).
The Swift paper, like the DTCC paper, like the Euroclear paper approaches the topic as you'd expect a piece of Central Market Infrastructure to. Basically, the only trusted partner you have to manage such an important distributed technology is, umm....Us!
That said, the Swift paper does do some nice 'un-packing' of it's own.
Like the UK Government paper:
https://www.gov.uk/government/uploads/system/uploads/attachment_data/file/492972/gs-16-1-distributed-ledger-technology.pdf,
I think the best thing about this paper is the nice little icons.
Swift have 'un-pack' DLT into 8 nice little icons. (I only got 4 from the UK Gov't paper).
They are:
Governance
Data Controls
Compliance
Standards
Identity
Security
Reliability and
Scalability.
All worthy elements. Some exceptions that I thought worthy of inclusion: Business model which doesn't appear to get a mention. Dunno why. Nor does Data Structure / Technology design. Maybe that is assumed...but as above, I think that is critical in how you access and 'un-pack' the data on chain to distribute into your ecosystem. And dispute resolution (maybe that is buried in governance? - more unpacking?).

Anyway, Ownership and Governance. Yes, critical and think permissioned issues. Data Controls. Think how do I marry the real world to the digital one (not mentioned) as much as protection against gaming and reverse engineering. Compliance. Yep, give different actors a 'lens'. Standards. Again, Swift would like to be the standard bearer...but there may be other ways around this (WIP). Identity. Yes. Authentication and Identification. Security. Yep. Un-hackable...but which chain and why? Reliability, Yes, we like a network that doesn't fall over and Scalability (may as well include latency as well). All in all, not a bad unpacking exercise.

Although I must say, as a joint partner is writing the paper (as boldly stated on the front page) I found this disclaimer cringe worthy:
Accenture’s role in the paper has been limited to the provision of insights and expertise.....we do not guarantee that this source and this information are accurate and/or complete and it should not be relied upon as such. The conclusions and recommendations provided in the paper represent the views of SWIFT and cannot be attributable to Accenture.

Enough un-packing!
I trust every one is now packed and off to enjoy a great Bank Holiday weekend.
Whatever your leisure....may it be a pleasure!

The ECB has published: ECB Occasional paper no 172, "DLT in securities post-trading"
https://www.ecb.europa.eu/pub/pdf/scpops/ecbop172.en.pdf

A fintech consultancy is raising a $50 million blockchain fund to sort 'the good ideas from the magic beans'
http://uk.businessinsider.com/11fs-raising-fund-banking-on-the-blockchain-2016-5

About $5 trillion of transactions are cleared every year in London’s gold market, which Barclays is exiting as it pulls out of precious metals. ICBC Standard last week joined the city’s precious-metals clearing system and last month won classification as a market maker by the London Bullion Market Association.

On 18 May 2016, the Permanent Representatives Committee (Coreper) approved, on behalf of the Council, an agreement with the European Parliament on a one-year delay to new securities market rules.
MiFID New dates
....the deadline for the member states to transpose MIFID II into national legislation will be set for 3 July 2017;
....the date of application of both MIFID II and MIFIR will be set for 3 January 2018.

DTCC 2015 Annual Report
http://www.dtcc.com/annuals/2015/index.php#main
Following its first 12 months in operation, the Payment Systems Regulator (PSR) has today published its Annual Plan which outlines the regulator’s key work and objectives for the year ahead.https://www.finextra.com/pressarticle/63779/payment-systems-regulator-publishes-annual-planBasel III Capital Requirements Affect Youhttps://www.finextra.com/blogposting/12610/basel-iii-capital-requirements-affect-you?utm_medium=dailynewsletter&utm_source=2016-5-17
(pretty basic / bland but I guess it gets a point across)

Citadel Securities acquires automated trading desk assets from Citi
https://www.finextra.com/pressarticle/64439/citadel-securities-acquires-automated-trading-desk-assets-from-citi?utm_medium=dailynewsletter&utm_source=2016-5-17
Stuff
Upcoming
http://www.conferenciaderendafixa.com.br/?lang=en-US
..and many thanks to the WMA.
http://www.thewma.co.uk/events/past-events/wma-insight-360-blockchain-the-missing-link
Craig Wright had come out as the Satoshi Nakamoto creator of bitcoin
#DLT for #FinServ: Important background to R3 Corda by @gendal bit.ly/1qreI4U
*** Personally, I don't buy this. Load of rubbish. If he was...why is the tax man impounding his house, why wait till now...why not just smash the Bitcoin Days Destroyed?
https://blockchain.info/charts/bitcoin-days-destroyed

.....22 of 30 Disney films analysed have more male that female dialogue. Even films with female leads, such as Pocahontas and Mulan, had more male speech.
https://www.weforum.org/agenda/2016/04/new-research-proves-what-you-already-knew-hollywood-is-sexist-and-ageist?

What is great about English sport...
http://www.bbc.com/news/world-australia-35878525?ocid=global_bbccom_email_29032016_top+news+stories+australia+

Funny, first thing people pointed out about my 'handle', is I share DLT with...
https://en.wikipedia.org/wiki/Dave_Lee_Travis

This guy, Michael Spence, suffers from 'Signalling' sickness. (Rhodes scholar, Harvard, Oxford, et al)
What is this signalling sickness? Students use degrees and courses to differentiate themselves from other students. But as more people attend university and complete courses, the brighter students have to accumulate more degrees to distinguish themselves. This results in more people spending more of their lives in educational establishments rather than in jobs, which in many cases do not inherently require much study.

Also among his beliefs are that high-frequency trading should be banned!
https://en.wikipedia.org/wiki/Michael_Spence
What I loved about this clip, is how the children respond to the music. Their unconscious reactions, as they get caught up in the moment, remind me of the joy of music and the arts.
https://youtu.be/fj6r3-sQr58?list=PLyB4zTaHbE69Bc7APMtTMAizDntd7wiNz
So, whatever you're doing this Bank Holiday - enjoy the music!
Source:
http://clearingandsettlement.blogspot.com/2016/05/unpacking-ecb-nsd-mifid-datese…
Share
Category
RSS feed
RSS feed